It seemed like a good idea at the time.

The City of Alameda would “partner” with a company called CityHealth Urgent Care, which runs urgent-care facilities in Oakland and San Leandro, to offer testing for the coronavirus at the Research Park complex at Marina Village.

The site would be open seven days a week from 9 a.m. to 5 p.m.  No appointments would be necessary.

And, best of all, the results would be available in 15 minutes.

On July 17, Mayor Marilyn Ezzy Ashcraft devoted an entire one-hour “town hall” to promoting the Marina Village testing site.  Her “fabulous guest” (her words) was CityHealth’s CEO, Sean Parkins, who started the company after having worked as a paramedic and a physician’s assistant.

“We certainly could not do this without the cooperation and collaboration of you and your whole team,” Mr. Parkins told the Mayor.  He then went on to describe how CityHealth would use the “latest, greatest analyzer” to deliver quick and accurate onsite results.

At a time when nearly everyone outside the Trump administration was bemoaning the unavailability of coronavirus testing, the Alameda project appeared too good to be true.

And so it was.

The Marina Village testing site opened for business on July 22.  According to City Manager Eric Levitt, testing was “paused temporarily” on July 23 in the morning and resumed later in the day.  It was “again paused” on July 24 and “opened back up” on July 25.  Then, on either July 31 or August 31, the site was closed permanently.

The press release issued by the City after the initial “pause” pointed to an “unanticipated and unfortunate issue with liability insurance coverage” as the reason for the suspension of testing.  “It’s a contractual issue between the property owner and CityHealth, who provides the testing,” Mr. Levitt was quoted in news reports as saying.

The problem turned out to be far more serious than that.  In fact, the Merry-Go-Round has learned, the Alameda County Public Health Department made multiple visits to the Marina Village site and identified a host of violations of ACPHD testing standards “that pose health risks to the public.”  Perhaps the most notable was that CityHealth was using a test – the so-called “antigen test” – that was not recommended for community testing sites like Marina Village because of an increased risk of false negatives.

According to ACPHD’s Public Information Manager Neetu Balram, the Health Department never formally ordered CityHealth to shut down the site.  Rather, its representatives “shared their concerns and how they could address those concerns” with the site operator.  Apparently, CityHealth either couldn’t, or decided not to, remedy the violations and instead walked away.  (The company did not respond to our request for comment.)

And where was the City of Alameda in all this?  Although the City knew, before the Marina Village site opened, what kind of test CityHealth was going to use, it apparently was unaware that an antigen test was not recommended for community testing locations.  According to Mr. Levitt, the City learned that fact – and found out about other problems with the operations at the Marina Village site – from ACPHD.  As a result of the Health Department’s “concerns,” he told us, the City decided to “move away from” the project the Mayor had so recently touted.

All in all, to us the whole story smacks of what our favorite British detective shows would call a “total cock-up.”

But it is a story that begins with good intentions.

According to Mr. Levitt, his staff had been seeking for some time to bring coronavirus testing to Alameda.  It had to find a private company who was willing and able to administer the tests.  (In that regard, the City’s demographics and coronavirus track record actually worked against it:  compared to other cities in Alameda County, the City of Alameda had fewer high-priority residents and fewer reported cases.)  And it had to find a property owner who was willing and able to make available a site of adequate size and location.

But eventually the City found what it needed:  CityHealth to do the tests, and Research Park as the place to do them.

According to a City press release, the Marina Village site was an immediate hit:  the site “saw attendance beyond expectations” on the day it opened, providing results to more than 1,000 people.

But then ACPHD entered the picture – and, upon inspecting the site, the Health Department didn’t like what it found.  According to a letter sent to CityHealth on August 4, ACPHD identified five separate violations of its testing standards:

The third item in the list – “inadequate procedures for appropriate use of tests” – would seem to be the most troubling.

Two types of tests are available to determine whether a person currently is infected with the coronavirus:  molecular tests, such as so-called “RT-PCR tests,” which detect the virus’s genetic material, and antigen tests, which detect specific proteins on the surface of the virus.  (Another test, known as the antibody or serological, test, shows whether a person has been infected in the past.)  This chart, prepared by the U.S. Food and Drug Administration, outlines the differences: 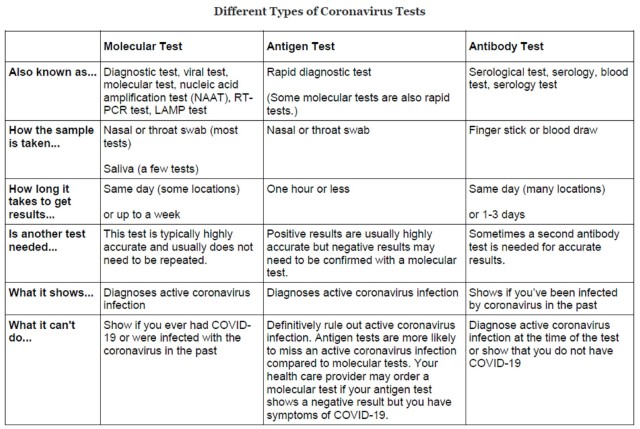 As the chart indicates, antigen tests yield results more quickly than molecular tests.  But, according to the FDA, they “have a higher chance of missing an active infection.”  As the Mayo Clinic explained,

The risk of misleading results has led public-health agencies to discourage the use of antigen tests in a non-medical setting.  According to ACPHD’s letter to CityHealth, both the Association of Public Health Laboratories and the California Department of Public Health warn against using such tests to screen asymptomatic persons, like those who would go to a community testing site.  (The two organizations also recommend against using such tests to screen healthcare workers, first responders, and other essential workers.)

ACPHD itself has formally endorsed this conclusion.  In its “COVID-19 Laboratory Testing Guidance for Clinicians” issued on July 22, the Health Department reiterated APHL’s advice that “rapid SARS-CoV-2 antigen tests should generally NOT be used for screening asymptomatic individuals, including healthcare workers and emergency responders, and should not be the primary tests considered when expanding testing to underserved populations.”

Now, the question immediately arises:  If antigen tests aren’t supposed to be used at community testing sites like Marina Village, why did the City and ACPHD allow CityHealth to open for business there in the first place – and then why, after learning that CityHealth was using a test with an enhanced risk of false negatives, didn’t the City and ACPHD shut down the site right away?

We don’t have a good answer to that question.

Mr. Levitt told us that, in “partnering” with CityHealth, the City was trying to satisfy the public’s “hunger” for coronavirus testing.  Antigen testing “gives more information than no testing at all,” he said, and it has been “approved by the FDA.”  That’s true – but the FDA recommends it for use only in medical settings.  Moreover, Mr. Levitt suggested, it was ACPHD’s role, not the City’s, to enforce the Health Department’s testing guidelines.  True again – but it’s the City’s job not to oversell a service it is encouraging residents to avail themselves of.

Ms. Balram told us that ACPHD did not know CityHealth was using an antigen test until it made its first site visit on July 22.  But it surely knew that its own guidelines recommended against use of such a test at a community testing site.  Indeed, the County’s Interim Health Director, Dr. Nicholas Moss, conceded at a “town hall” with Mayor Ashcraft on July 31 that an antigen test is “best used only in limited situations for symptomatic persons.”

Ms. Ashcraft never asked Dr. Moss why, once ACPHD discovered that CityHealth was using a non-recommended test, it permitted the site to continue to operate.  Instead, she listened politely as he reaffirmed the County’s goals in the broadest of terms – “We just want to have what’s best for Alameda residents” – and noted, apparently in CityHealth’s defense, that there are “always wrinkles that need to be worked out” with any new testing program.

Four days after his “town hall” with the Mayor, Dr. Moss signed the letter identifying CityHealth’s violations of the ACPHD testing guidelines and demanding that the company “immediately correct these deficiencies at all testing site it operates within Alameda County.”  By then, the Marina Village site already had closed.

We don’t mean to question the motivations of City staff or County health officials, and we’re in no position to challenge their expertise.  Perhaps, however, the next time it would be better for our local officials to be more circumspect in their approach:  a little more due diligence; a little less effusive endorsement.