A question for the candidates

Posted on September 27, 2020 by Robert Sullwold

None of the four groups sponsoring Council candidate forums so far has asked the Merry-Go-Round to supply a question, so we’re hoping that someone from the one remaining sponsor, the Alameda Chamber of Commerce, will be willing to pose this question for us at its forum on October 8:

So what do you think about what happened to SB 899?

Phrased that way, the question seems pretty arcane, and, of the five candidates running for Council, probably only the two with a friend in the State Legislature – Jim Oddie and Malia Vella, both of whom can count Assemblyman Rob Bonta among their campaign financiers – will know what we’re talking about.  So let us explain:  SB 899 was a bill introduced last March by State Senator Scott Wiener to make it easier for “faith institutions” – e.g., churches – and other non-profit organizations to build affordable housing on their property by right, even if local zoning laws – or, for that matter, city charter provisions – prohibited that type of housing.

Endorsed by affordable-housing organizations and praised by newspaper editorialists and opinion writers, SB 899 passed the Senate unanimously, 39-0, at the end of June.  But it never made it to the floor of the Assembly, much less to Governor Newsom’s desk.

Why not?  Therein lies the story we’d like to ask the Council candidates about.  Their answers should offer some insight into whose interests they consider more important:  poor people who need affordable housing, or labor unions that carry political clout.  And that is something Alameda voters might want to know before they fill out and mail in their ballots.

SB 899 is one of a host of housing bills that Senator Wiener, a former San Francisco supervisor and a champion of “progressive” ideals, has introduced since he was elected to the Senate in 2016.

To date, his major achievement has been SB 35, which became effective in January 2018 and which already is being used in Alameda for the North Housing project.

SB 35 is focused on cities that haven’t issued enough building permits to satisfy their Regional Housing Needs Assessment quotas.  (Alameda is such a city, since, although it has zoned enough sites to meet its RHNA targets, it hasn’t actually issued building permits sufficient to do so.)  In those cities, a multi-family residential project that includes a specified percentage of lower-income housing (and meets other criteria) is entitled to “streamlined” processing and “ministerial” approval – and no environmental review is required.

Senator Wiener introduced SB 35 on his first day in office.  According to “Golden Gates,” Conor Dougherty’s recent book on the Bay Area housing crisis, the Senator wrote the bill “in such a way as to anticipate the various special interest kill orders that would inevitably emerge during the session.”

One of those anticipated kill orders came from what Mr. Dougherty calls the “union bosses,” specifically those from the construction trade unions.  To get them to acquiesce in the proposed legislation, Senator Wiener included two union-friendly provisions in the final bill:  one required all contractors on a project to pay “prevailing wages” (i.e., union wages); another required them to employ a “skilled and trained workforce.”  Essentially, the latter requirement guaranteed that union labor would be used on SB 35 projects, since a “skilled and trained workforce” is defined as one where at least 30% of the workers have completed a state-approved apprenticeship program – and the unions run nearly all of those programs.

But Senator Wiener got the unions to let him carve out a key exception to the “skilled and trained workforce” requirement.  It did not apply to any project that consisted of 100 percent affordable housing.

Why did the Senator want the carve-out?  He didn’t say publicly, but the reason isn’t hard to discern:  Affordable housing is extremely expensive to build – and very difficult to finance.  (According to a recent study by the Terner Center at the University of California – Berkeley, the average cost to build an affordable-housing project in the greater Bay Area exceeds $600,000 per unit, and 80 percent of the projects need to find four to eight different funding sources.)  In such an environment, imposing any additional cost burden necessarily will make building affordable housing more expensive and more difficult – and thus less of it will get built.

Mandates favoring union labor exact just such a toll.  According to the Terner Center study, a prevailing-wage requirement alone increases total construction costs for an affordable-housing project by approximately $53,000 per unit.  Not only are wage rates higher, but the “soft costs” associated with “paperwork and bureaucracy” are greater and the pool of bidders is smaller.  No wonder that a legislator like Senator Wiener whose goal is to increase the supply of affordable housing would try his best to exempt this type of project from as many union-friendly but costly requirements as he could.

The same mindset may have animated Senator Wiener when he came up with SB 899.

The impetus for the bill was simple.  As the Senator explained, “Churches and other religious and charitable institutions often have land to spare, and they should be able to use that land to build affordable housing and thus further their mission.”  (The Terner Center has estimated that there are 38,805 acres of “potentially developable” land owned by churches and similar bodies in California.)

SB 899 granted religious and educational institutions approval by right – i.e., no environmental review required – to build 100 percent affordable multi-family residential projects, with at least 80 percent of the units reserved for lower-income households, on their property.  As passed by the Senate, the bill allowed up to 30 units per acre in residential or mixed-use neighborhoods and up to 40 units per acre in commercial zones, and permitted one additional story above the otherwise applicable maximum building height.  And there was no requirement either to pay prevailing wages or to employ a “skilled and trained workforce.”

After passing the Senate unanimously, SB 899 went to the Assembly.  And there’s where the trouble began.

According to news reports, SB 899 faced “strong opposition” from the construction trade unions, who demanded that Senator Wiener put into the bill the union-friendly provisions – not just the “prevailing-wage” mandate but also the “skilled-and-trained-workforce” requirement – that he had left out of the version passed by the Senate.

And they weren’t reluctant to resort to bare-knuck 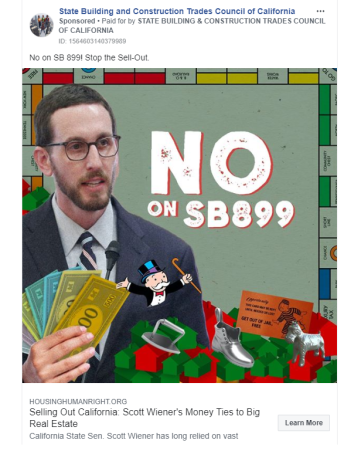 le tactics.  The State Building and Construction Trades Council posted a “No on SB 899” Facebook ad depicting Senator Wiener clutching a handful of Monopoly cash with the game board in the background.  Accused of anti-Semitism – Senator Wiener is Jewish – the unions at first defended the ad. “We are certainly not about putting anybody down, but people that do the wrong things sometimes try to hide behind any issue they can hide behind,” the Council president said.  But the furor didn’t abate, and the unions pulled the ad.

Then, to add injury to insult, the California Labor Federation, which had backed Senator Wiener in the primary, decided not to endorse him in the general election.  This decision, one article suggested, was payback for the Senator’s refusal to include the sought-after union-friendly requirements in SB 899.  “We asked him to fix this, and he refused,” the executive director of the San Francisco Building Trades Council was quoted as saying. “He crossed a line with the building trades. And it’s so sad.”

The unions’ tactics distressed Senator Wiener, and he called the California Labor Federation’s decision “disappointing and short-sighted.”  In a statement, he continued:

It sends a powerful message to Legislators that you can stand strong with Labor for many years, but it’s not enough.  The bill at issue — SB 899 — is about nonprofits building low-income housing.  The bill fully complies with agreements we’ve made with the Building Trades over the years on labor standards.  We even sent the bill language to the Trades before we introduced it, and the Trades signed off on the bill and said they had no objection.  Three months later, the Trades changed their position, which they are entitled to do.  Once the Trades communicated that new position to me, we immediately began to engage to try to reach a resolution.  Rather than engage, the Trades quickly escalated, running vile digital ads attacking me and going after my Labor Fed endorsement.

The legislative history suggests that Senator Wiener did try to meet the unions’ halfway.  On July 27, SB 899 was amended – an “amendment by author,” according to Legiscan – to add a prevailing-wage provision similar to the one the Senator had agreed to include in
SB 35.  But he apparently drew the line at inserting the “skilled and trained workforce” requirement the unions also had demanded, and neither the July 27 amendment nor a subsequent amendment on August 3 contained any such provision.

But this conciliatory move didn’t satisfy the unions, and, as the legislative session neared a close, the San Francisco Chronicle reported that Senator Wiener had “shelved” SB 899 “because he couldn’t reach an agreement on labor provisions.”  The article summed up the overall situation this way:

Affordable-housing developers have raised concerns after numerous bills withered in the face of opposition from the State Building and Construction Trades Council of California, a powerful advocate at the Capitol for legislation that could bring jobs to the hundreds of thousands of construction workers in its unions.

The trades pushed to include hiring guarantees for skilled workers in measures meant to make it easier to build — including for projects designed to be affordable for low-income Californians, which were exempted in a legislative deal on the issue three years ago. As lawmakers prepare to break at the end of August until next year, the conflict remains unresolved.

Now, we don’t really expect the Chamber of Commerce to pose the precise question we asked at the beginning.  But there may be a way to inquire about the extent to which the Alameda Council candidates support (or oppose) imposing costly union-friendly requirements on affordable-housing projects.

The Chamber could phrase the question generally:  Do you support requiring payment of prevailing wages and use of a “skilled-and-trained workforce” on affordable-housing projects even if such requirements make the project more expensive to build and difficult to finance?

Or the Chamber could pose it more specifically:  Would you vote for an ordinance providing that a non-profit developer of an affordable-housing project in the City of Alameda shall not be required to use only contractors who agree to pay prevailing wages or to employ a “skilled and trained workforce,” unless state or county law mandates otherwise.  (Vanessa Cooper, executive director of the Alameda Housing Authority, told us that the County’s grant of Measure A-1 funds for the Everett Commons project was conditioned on AHA enforcing a prevailing-wage requirement.)

Either way, we, for one, would be interested in the response.  We suspect that all of the candidates would declare their unswerving devotion to building more affordable housing.  But the question would force them to say just how far they’d go toward achieving that objective.  Are they willing to run the risk that organized labor will take revenge if they, like Senator Wiener, stand behind their commitment to the cause of affordable housing?

And, of course, the candidates in whose answers we would be most interested are Council members Oddie and Vella.  Mr. Oddie took in $6,850 in cash contributions from various construction trade unions in 2014, and $19,300 from them in 2018.  Ms. Vella got $9,250 in cash contributions from those unions in 2016; they also donated $15,250 to the “Alamedans United” PAC that supported her and other union-endorsed candidates.  Thus far in current election cycle, the construction trade unions have given $4,000 to Mr. Oddie and $9,500 to Ms. Vella.

For these two beneficiaries of union cash, the question could be posed this way:  Given a chance to create more affordable housing, would you act in the best interests of your low-income constituents – or would you put your mouth where your money is?

A link to campaign finance statements, as well as a wealth of other useful information, may be found at http://www.mikemcmahon.info/election20.htm#contributionsSept16.

4 Responses to A question for the candidates