Posted on September 22, 2019 by Robert Sullwold

When we were reviewing the recently approved Climate Action and Resiliency Plan, the Merry-Go-Round discovered something that, at first glance, appeared rather startling:

The CARP states that its recommended “adaptation” measures are based on the assumption that Alameda will experience 24 inches of sea-level rise by 2050.  But, according to projections available through the San Francisco Bay Area Conservation and Development Commission, the flooding expected under that scenario will be isolated and minimal, and, according to the State of California’s Ocean Protection Council, the chances that it will actually occur are less than one in 200!

The following maps, produced using the online “Flood Explorer” tool developed by the BCDC, tell the story.  They show the impact of 24-inch sea-level rise in Alameda – a height that, according to the most recent “Sea Level Rise Guidance” issued by the OPC, has only a 0.4% probability of occurring by 2050.

For the main island:

And for Bay Farm Island:

This is the color key, although you’ll have to look carefully to find the few areas for which it applies (the red lines show areas of “overtopping”):

So minor the impact, so remote the odds.  What gives?  One might even argue that the City can find better ways to spend taxpayer money – like, say, on building a new state-of-the-art fire station at Alameda Point and hiring 24 additional union firefighters to staff it – than on combating the relatively insignificant effects of climate change.

But calm down.  We’ve played a trick on you.

As the CARP makes clear, flooding along the shoreline is caused by two phenomena:  sea-level rise and storm surge.  (Storms also can cause, or contribute to, “overland” flooding, but for our purposes we’ll focus on shoreline flooding.)  If the analysis takes account of storm surges as well as sea-level rise, the picture changes dramatically.

Let’s start with the same projected 24” sea-level rise.  Now add the storm-surge impact of a so-called 100-year storm (i.e., a storm that has a 1-in-100 or 1% chance of occurring in any given year).  The maps below show the result of combining the two factors.

For 24” of sea-level rise and a 100-year storm, this is where the flooding occurs on the main island: 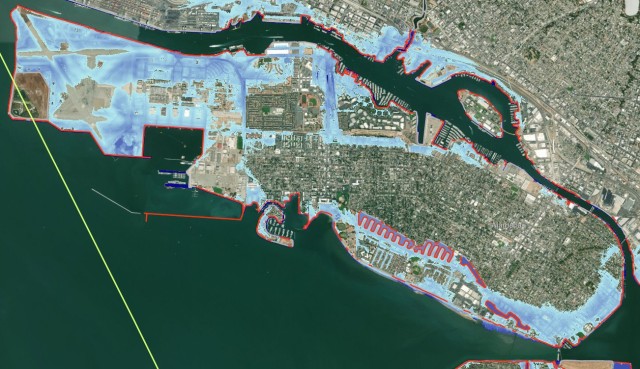 And this is flooding on Bay Farm under the same scenario:

Indeed, even the storm-surge impact from a five-year storm (i.e., a storm that has a 1-in-5 or 20% chance of occurring in a given year) makes a noticeable difference.

For 24” of sea-level rise and a five-year storm, this is where the flooding occurs on the main island: 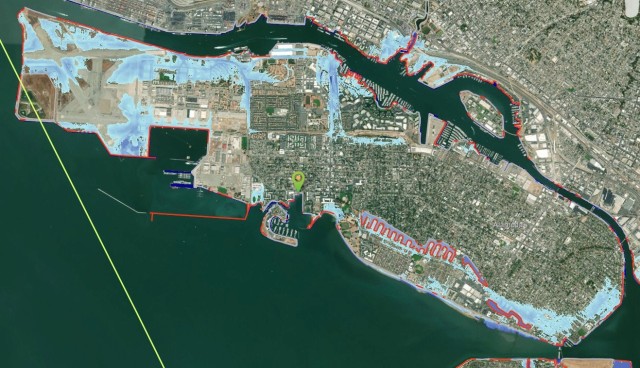 And this map shows Bay Farm flooding under that scenario:

These maps show the effects of storm surge after a 24” sea-level rise.  But, of course, ocean levels rise gradually, not all at once.  So, to prevent overstating the case, we used the BCDC flooding tool to prepare maps assuming 12” of sea-level rise – half the level assumed by the CARP and corresponding approximately to the OPC’s “median” level for 2050 of 0.9 feet, to which it gives a 50% probability of occurring – and adding the storm-surge impact from a 100- and a five-year storm.

For 12” of sea-level rise and a 100-year storm, this is where the flooding occurs on the main island:

And this represents flooding on Bay Farm:

For 12” of sea-level rise and a five-year storm, this is where the flooding occurs on the main island: 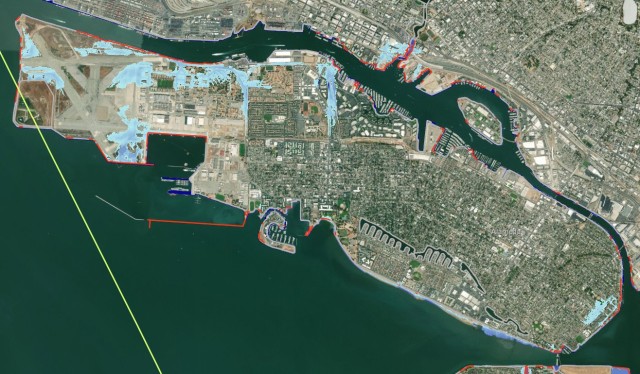 And this shows the flooding on Bay Farm: 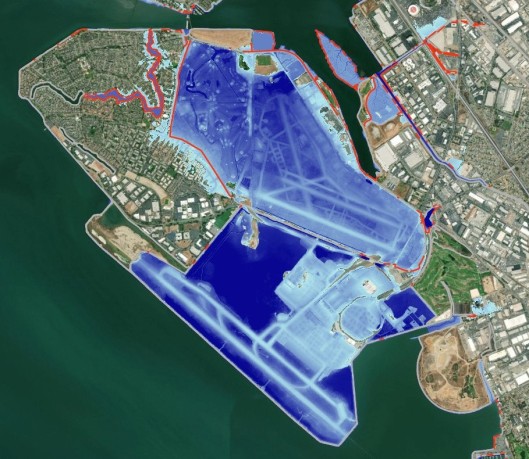 Using the BCDC flooding tool, one can ring many more changes with different combinations of sea-level rise and storm surge, but we’ll stop there.  Whichever of our sea-level rise/storm surge maps you choose, you’ll should get a pretty good idea of where in Alameda to expect flooding caused by climate change to take place in the near future (i.e., by 2050).

Want a more detailed analysis?  The CARP authors have obliged.  Based on an assumed 36” increase in “total water level” (which can be caused by sea-level rise, storm surge, or both), they identified “those assets or areas exposed to flooding risk soonest and with greatest consequence,” and, of course, prepared associated maps. 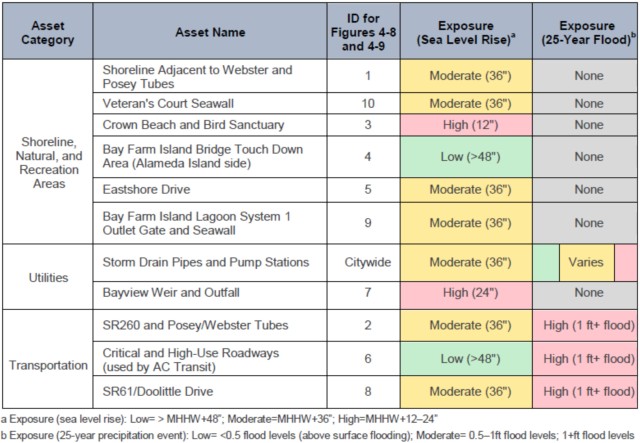 (The column labelled “Exposure  (Sea Level Rise)” needs explaining, which the City’s Patrick Pelegri-O’Day was kind enough to do for us:  “Exposure,” he told us, is “the answer to the question:  will water touch this asset at XX inches of SLR?”  For example, the table shows that Doolittle Drive is not exposed to flooding until water levels are 36” above today’s high tide.)

And here are the maps, the main island first, then Bay Farm:

Now comes the hard part.  Based on the predicted impacts, one can begin to devise what the CARP calls “adaptative” measures to protect these “priority” areas against flooding caused by sea-level rise and storm surges.  And that is what the CARP analysts do next in chapter four.  Then, in chapter six, they estimate the cost associated with each action.

Unfortunately (or not), we’ve now reached the top of our pay grade, since we lack the expertise necessary to critique the efficacy of the recommended actions or to evaluate their associated costs.  But the exercise has been useful for us, if only for selfish reasons:

We now know that we’d have to think twice about buying, leasing, or living in property located in one of those areas where the chances are good that, unless Council decides to spend the money to eliminate or reduce risk, we’d be fighting off flooding by 2050.  And we’d be sure to avoid a route that takes us through the Webster-Posey tube under any circumstances.

But one member of our household can relax.  Check out the green area in the bottom right corner on the Bay Farm maps.  Those are the golf courses at Corica Park, which remain high and dry in every scenario except the worst one (24” sea-level rise and a 100-year storm).  Climate change be damned, the Alameda Womens’ Golf Club can go on forever!

(Correction:  After the piece was posted, our friend Joe VanWinkle pointed out the green area to which the last paragraph referred is actually the Metropolitan Golf Links located just south of Alameda.  But our house golfer can still relax:  She plays Metro, too.  And they have a a womens’ golf club there as well.)