And now for the bottom line

So it’s time to get to the bottom line.

In the Merry-Go-Round’s examination of the proposed new public safety union contracts Council is being asked to approve on April 29, we’ve looked separately at the economic terms of the MOUs between the City and the unions and at the features of the new “OPEB trust” incorporated in the contracts.  Today, we’ll put the two together.

Based on our analysis of the staff reports and attachments, as supplemented by information provided to us by Interim City Manager Liz Warmerdam, we’ve come to two principal conclusions:

For the first conclusion, we assumed a total public safety payroll as of January 2016 of $21,194,000.  (This is the number used by Bartel & Associates for Fiscal Year 2013-14, but it’s the most current number we could find).  We computed the annual raises using the percentages stated in the MOUs and the employer contribution rates published by CalPERS (net of employee cost-sharing).  (As City Treasurer Kevin Kennedy and City Auditor Kevin Kearney have explained, every additional dollar paid in wages requires a corresponding CalPERS contribution by the City).  We then compared the results to the annual subsidy provided by the OPEB trust – i.e., the amount deducted from the trust to pay toward that year’s “pay-as-you-go” OPEB cost – set forth in the table prepared by Bartel.

Here’s what the data showed:

Or, if you prefer a graph:

For the second conclusion, we started with the cumulative net impact of the wage raises and trust subsidies as of the end of the six-year contract term.  We assumed that, thereafter, there would be no further raises or increases in CalPERS employer contribution rates.  (Admittedly, this assumption is unrealistic, but anything else would be speculation). We then took the annual trust subsidies through 2034, when the trust is expected to run out of money, from the Bartel table and computed a running balance.

Here’s what the data showed: 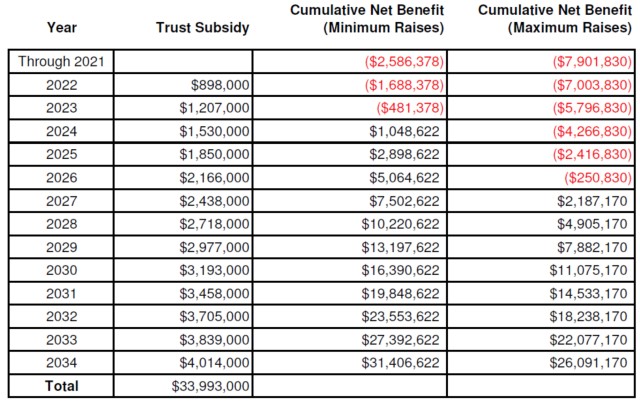 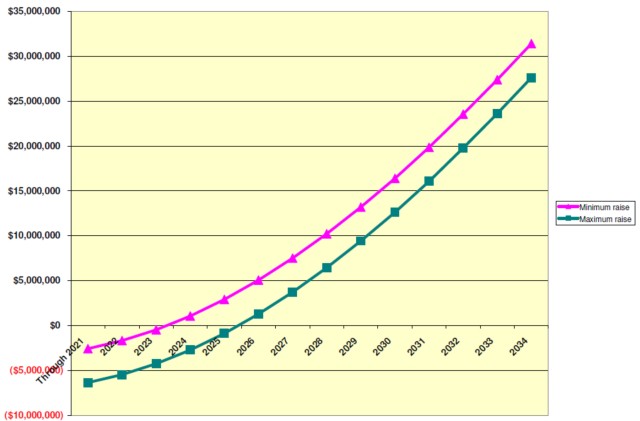 The City will be required to contribute $5 million initially, followed by annual contributions of $250,000 for 10 years, to establish the OPEB trust.  For its $7.5 million investment, the City will obtain the trust subsidies shown in our two charts/graphs.  But, due to the new public safety union contracts, it also will incur the additional wage and CalPERS costs shown in those charts/graphs.  Taken together, the trust and the contracts impose short-term pain in exchange for offering the prospect of long-term gain.

Given this picture, Council will need to make a judgment call.  It will have to decide, in the context of a five-year forecast showing annual deficits beginning in Fiscal Year 2016-17 and increasing over the following three years, whether the City can afford to make the multi-million dollar investment and to endure the short-term pain.  It would make no sense to approve a deal that would drain the General Fund of its entire balance before any significant net economic benefit from the trust begins.  Once the money is gone, even making Marie Gilmore mayor again won’t bring it back.

But if the City can survive the term of the new MOUs and the years immediately thereafter without running out of money, the trust will start to have a positive impact.  From 2022 through 2034, when its assets are exhausted, the trust will subsidize total OPEB costs by $34 million.  Over the entire 19-year period, the cumulative net economic benefit will be between $26.1 million and $31.4 million.  Assuming – and it’s a big assumption – that future councils hold the line on wages, and that CalPERs doesn’t keep raising the employer contribution rate, the trust proposal indeed will create a bit of “breathing room” (outgoing City Manager John Russo’s phase) for the City to address its other pressing financial issues.

This judgment call is not easy.  And it is not the only one that Council will have to make in deciding whether to approve the new public safety union contracts.  As we pointed out last time, requiring employees to contribute to a trust that will be used to pay a portion of their retiree health benefits may create “vested” rights that otherwise would not exist.  In so doing, it would limit the City’s ability in the future to take actions that, unlike the trust proposal, would make a substantial dent in the City’s unfunded OPEB liability.

The Merry-Go-Round agrees with Mr. Kennedy that Council has a “fiduciary” duty – ordinarily, we eschew loaded words, but this one fits – to seek independent legal and financial advice on these issues before it approves the contracts.  We hope that a decision so vital to the City’s fiscal health won’t depend simply on how many firefighters IAFF Local 689 can get to pack Council chambers on the 29th.

2 Responses to And now for the bottom line