If he – and we’re assuming that there is an actual person named Tim Lewis – read the draft 2014-22 Housing Element just released by City staff, he would have learned that: 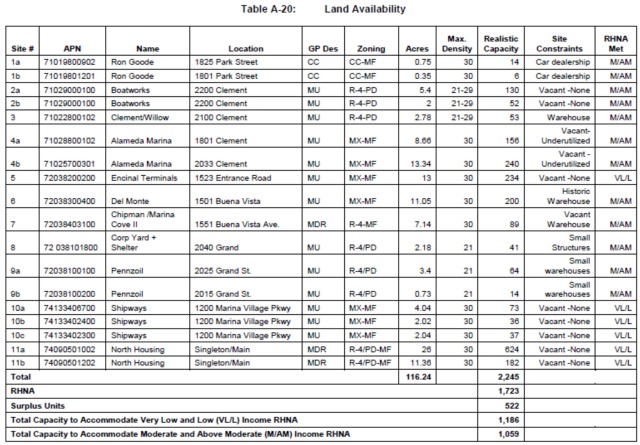 On its face, the table supports each piece of bad news for Mr. Lewis.  But Tim can relax.  In fact, the Housing Element doesn’t really depict what housing the City wants or expects to be built in the next eight years.  Instead, it appears to be an artificial and unrealistic construct whose main purpose is satisfying the state Department of Housing and Community Development (“HCD”).

Let’s start with the acronyms.  State law requires a city like Alameda to adopt a “housing element” that, among other things, describes how the city intends to “accommodate” its share of the “Regional Housing Needs Assessment” (“RHNA”) by “mak[ing] sites available” for residential development.  The RHNA, which is determined by the regional “council of governments” – in this case, the Association of Bay Area Governments (“ABAG”) —  sets forth the total housing units required for the next eight-year “planning period” and breaks them into four income categories: low, very low, moderate, and above-moderate (abbreviated as “VL, L, M, and AM).”

To comply with this obligation, a city must prepare an “inventory of land suitable for residential development, including vacant sites and sites having potential for redevelopment.”  For each site, the inventory must state the number of units that can be “accommodated” (the “realistic capacity”).  It must also assign each site to one of the four RHNA income categories.  The table shown above is the City of Alameda’s inventory for the Housing Element covering the period from 2014 to 2022.

If the inventory contains sites with sufficient “realistic capacity” to meet the quota in each of the four income categories, a city has met its RHNA obligation, the housing element complies with this aspect of state law, and the state HCD will approve it.  If the inventory does not contain enough sites, the city must re-zone other parcels to provide the additional capacity needed to meet the income-category quotas.  That’s what the City of Alameda did for the 2007-14 Housing Element approved by Council in July 2012.

The Housing Element law does not specify how to determine whether a site is “suitable for residential development” and thus should be included in the inventory.  It’s pretty much a judgment call by the city’s planners (and politicians).  In Alameda, the planners have exercised their discretion in some interesting ways.

Did these two parcels become less suitable for residential development since July 2012?  Only in a manner of speaking.  After the 2007-14 Housing Element was adopted, the East Bay Regional Parks District sued to force the City to void the ordinance that re-zoned the Neptune Point parcel, and now a citizen’s group is circulating a petition to place on the November ballot an initiative re-zoning that site to open space.  Just recently, AUSD agreed to sell the Island High parcel to the Alameda Housing Authority, which intends to build a government-sponsored low-income housing project on the site.

Although nothing has happened physically to either of these two parcels since July 2012, and each remains zoned for residential use, the City took them out of the inventory anyway.  Asked by the Merry-Go-Round about the Neptune Point decision, City Planner Andrew Thomas candidly replied: “The housing element and city got pulled into an existing fight between the Feds and the park district.   This is not our fight so I am extracting the housing element from the fight.  This does not make the fight go away but it avoids any further housing element bashing by the combatants.”

There’s an even more noticeable omission in the inventory for the draft 2014-22 Housing Element: Alameda Point.  The inventory includes no sites at the Point whatsoever.

The 2007-14 Housing Element omitted the Point, too, because, according to the staff report, the land hadn’t yet been conveyed to the City and it wasn’t yet “available for development.”  The former statement was true but irrelevant – the City doesn’t have to own the land included in the inventory – but the latter was accurate, since, as of July 2012, the former Naval Station was still zoned as “M-2/G” (“General Industrial with a Government Combining District”).  “Once the land at Alameda Point has been conveyed and is available for residential development,” the staff report said, “it can be used for the next Housing Element cycle.”

Or not.  Since July 2012, not only did the City get title from the Navy to 510 acres at the former Naval Air Station but it adopted a zoning ordinance permitting residential uses in the “Waterfront Town Center” and “Main Street Neighborhood” districts at the Point.  The draft 2014-22 Housing Element acknowledges that additional sites at the Point “will be available for residential development” before 2022.  So why aren’t they included?  Because, the draft says, they’re “not necessary to meet the RHNA.”  The judgment appears to be:  If you don’t need to include a site to keep ABAG and HCD happy, you can leave it out even if you planning to see housing built there.

This omission of Alameda Point from the inventory is not only remarkable but ironic.  If you read the ABAG staff memos explaining the methodology for distributing the RHNA among Bay Area cities, you’ll see that ABAG decided to allocate 70 per cent of the regional housing need based on projected growth in so-called “priority development areas” (“PDAs”) – i.e., areas containing “mixed use, infill development near transit and job centers.”  As it happens, the City of Alameda has two officially declared PDAs: the northern waterfront – and Alameda Point.  The spreadsheets prepared by ABAG project that the need for housing in these two PDAs will grow by 1,250 units between 2014 and 2022.  But, by omitting Alameda Point, the draft 2014-22 inventory doesn’t put any units in one of them.

Okay, you may be saying, maybe the inventory does not contain every site “suitable for residential development.”  But surely the descriptions of the sites actually included in the inventory are reliable.

Well, not really.  City staff is making judgment calls here, too.  As a result, the inventory cannot be considered a dependable guide to the type of housing that the City wants, or expects, to get built in the next eight years.

Take the column entitled “realistic capacity” – i.e., how many units can be built on a parcel.  Staff came up with a formula based on acreage and density to derive the number for each site.  But the formula seldom has produced results matching developer proposals.  For example, as we noted at the beginning, the DelMonte warehouse is counted for 200 units in the draft 2014-22 inventory, but TLC is proposing to build 309 units there.  And the converse also is true:  the 2007-14 inventory put the Chipman parcel down for 193 units, but the developer ended up proposing (and the City approving) only 89.

We can’t fault City staff for using a formula to estimate “realistic capacity.”  But it’s virtually certain that the actual number of new housing units built between 2014 and 2022 will not equal the total shown in the draft Housing Element.

Now take a look at the column titled, “RHNA Met,” which shows which of the four income categories each parcel has been placed in.  One might expect that the categorization would depend on the type of housing the City wants or expects the property to be used for – i.e., a parcel designated as “VL/L” will be the site of low-income housing.  In fact, the designations appear singularly untethered to reality.

The Housing Element law itself creates the opportunity for gerrymandering:  if a parcel is zoned for a density of up to 30 units per acre, it may be counted toward the RHNA quotas for lower income households.  But it doesn’t have to be.  So a city can put such a parcel in whichever of the four income categories it sees fit.  And that is just what the City of Alameda’s planners have done.

For the 2007-2014 Housing Element, at staff’s recommendation, Council re-zoned 16 parcels to the 30-unit per acre density.  (The purported justification? The one usually offered by the Russo/Gilmore administration:  To avoid a lawsuit).  This generated 2,306 units to play with.  Staff chose to put 10 of the parcels, with a total capacity of 1,246 units, into the VL/L income category; the other six, with a total capacity of 1,060 units, went into the M/AM income category.

Both times, after the pieces stopped moving, staff ended up with an inventory satisfying the RHNA quotas in each of the four income categories.  But if you look a little closer, you’ll discover a curious phenomenon: the same property is placed in one income category in the 2007-14 inventory and in another in the 2014-22 inventory.

The movement of a parcel from one category in the 2007-14 inventory to another in the 2014-22 inventory can’t be explained by any change in expected use.  Indeed, the designations themselves don’t always fit the realities.  For example, Tim Lewis surely intends to develop the Encinal Terminals parcel for high-end housing; after all, that’s where the money is.  So why categorize that parcel as VL/L in the 2014-22 inventory?  Similarly, one seriously doubts that a developer will be interested in building low-income housing on the 8.1 acres of waterfront property known as Shipways on Marina Village Parkway.  Yet these three parcels, too, are categorized as VL/L in the 2014-22 inventory.

One is left with the unmistakable impression that the driving force behind the designations is not a desire to reflect preferred or expected uses but simply the need to hit the required totals in each income category.  When the Merry-Go-Round conveyed this impression to Planning Director Thomas, he responded that, “Yes, it is a bit of a numbers game with HCD, because cities don’t actually build housing –developers build housing — so the state can[not] really hold cities responsible for actually producing housing – only that we provide land zoned for housing.”

The creativity City staff has displayed in working with the income category designations raises an even more troubling issue.  Dare we say the words? It’s Measure A, the City Charter provision establishing 21 units per acre as the maximum density for residential development.  When the City re-zoned the 16 parcels to 30 units per acre in July 2012, staff argued that state law “trumped” – lawyers would say, “pre-empted” – Measure A.  But, as we have previously pointed out, this argument flies only for the 10 re-zoned parcels that were placed in the VL/L category; it doesn’t support re-zoning the other six parcels that weren’t designated for very low or low income housing.

But the band of Measure A defenders is dwindling, and the actions taken in July 2012, and re-affirmed this time around, are likely to go unchallenged.  Wouldn’t Tim Lewis be surprised, though, if someone sued to stop his project for the DelMonte warehouse on the grounds that it was prohibited by Measure A?

Don’t get us wrong.  We don’t condemn Mr. Thomas for using all of his skills and all of his powers to come up with a housing element that will satisfy the state HCD (any more than we condemn City Finance Director Fred Marsh for his similar efforts to construct a budget the Mayor can call “balanced”).  In fact, if the Russo/Gilmore administration wants to add his achievements to its bragging list – and somehow we suspect it will – we won’t complain.  But City Hall ought not to try to sell the Housing Element as a “blueprint” – that’s the description used in the headline in The Alamedan –  for future residential development.  In fact, it’s extremely unlikely we’ll ever see a reality that looks anything like it.

3 Responses to Blueprint or chessboard?